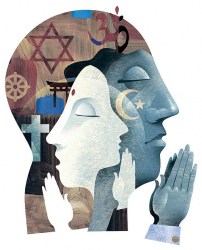 We are hosting an unusual program this Saturday night for erev Shavuot, a multi-faith exploration of revelation with the participation of clergy and teachers from Christian and Muslim communities who are our neighbors in Northwest Philadelphia.  Although this program may be surprising and even challenging to us, there are two main reasons that I thought it important to hold such a program on Shavuot this year:

Revelation belongs to everyone

The ancient rabbis teach that when the voice of God rang out at Sinai, all of creation was silent in order to allow the Divine words to reverberate throughout the world.  The words of Torah were directed not only to the Israelites, and not only to the “mixed multitude” of non-Israelites who camped with them at Mt. Sinai, but also to the non-Israelite world at large.  Similarly, the ancients teach that the words of Torah miraculously resounded in all 70 languages of the world simultaneously, not just in the Hebrew of the Israelites.  Both of these teachings emphasize that the revelation at Sinai, although recorded by and brought to others by the Jewish people, was intended for the whole world.  In our time, Christians and Muslims both look to the moment at Sinai as a significant source of revelation for them, although they differ in how they interpret and understand it.  By studying alongside them, we can come to better understand the universal significance of revelation that the ancient rabbis taught, as well as the particular significance that it has for the Jewish people and the covenant of Torah to which we are committed.

Religious minorities are under attack

During this past year we have seen and heard horrible expressions of prejudice against religious minorities, including proposals to actively discriminate against Muslims in immigration and law enforcement.  People in the public sphere have called into question the legitimacy and loyalty of American Muslims and other religious minority groups, and we have seen opposition to the building of mosques and other houses of worship in some areas.  All of this has taken place against a backdrop of widespread ignorance about the religions in question and a lack of understanding between people of faith in general.  As a religious community dedicated to diversity within ourselves, we have an obligation to stand up to counter these very disturbing trends.  We must reach out to our neighbors of other faiths in a spirit of mutual respect and genuine curiosity.  Our community and traditions are strong; we need not be afraid of encountering other faith traditions and seeing their similarities to us as well as the ways in which we diverge from each other.  Such encounters can only make all of us stronger, more learned, more dedicated to the integrity of each tradition, and more inclined to stand shoulder to shoulder against hatred and bigotry wherever they may arise.

Please join us as we explore, learn, challenge, and grow together in the finest tradition of Torah study this Shavuot.