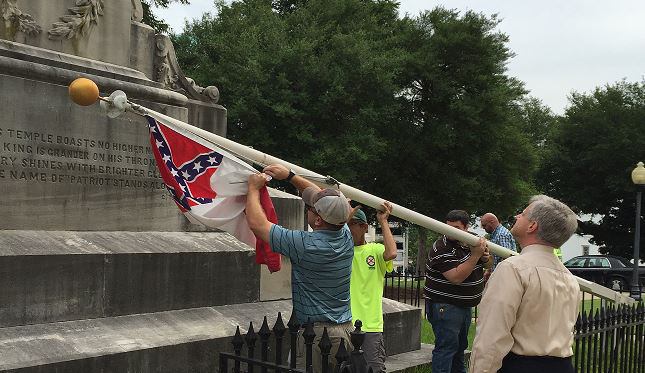 This week we saw an important symbolic step taken by the state of South Carolina, as its legislature voted to remove the Confederate flag, a symbol of a racist past, from the state capitol (as Alabama did in the photo at left).  In Israel, we saw the governing coalition take an important symbolic step as it repudiated the words of one of its own ministers, affirming that all Jews – even Reform and Conservative Jews – are welcome in Israel and among the Jewish people.  In both cases, these symbolic steps were welcome.  But in neither case should we make the mistake of confusing symbols with substance.  Although the Confederate flag will no longer fly over the South Carolina capitol, the truth is that endemic, structural racism continues to constrain the lives of African Americans in South Carolina and in this nation as a whole, and justice demands substantive attempts to change both the legal structures that makes racism possible and the social atmosphere in which it thrives. Although the representatives of the governing coalition in Israel said the right words, the truth is that non-Orthodox Jewish Israelis – who represent a large majority of Israel’s Jewish population – continue to suffer under a system that does not recognize their Jewish choices as legitimate.  The Torah teaches us that truly moral action requires both symbol and substance.  Facing injustice in our own time, we must demand both from ourselves and from those who represent us.