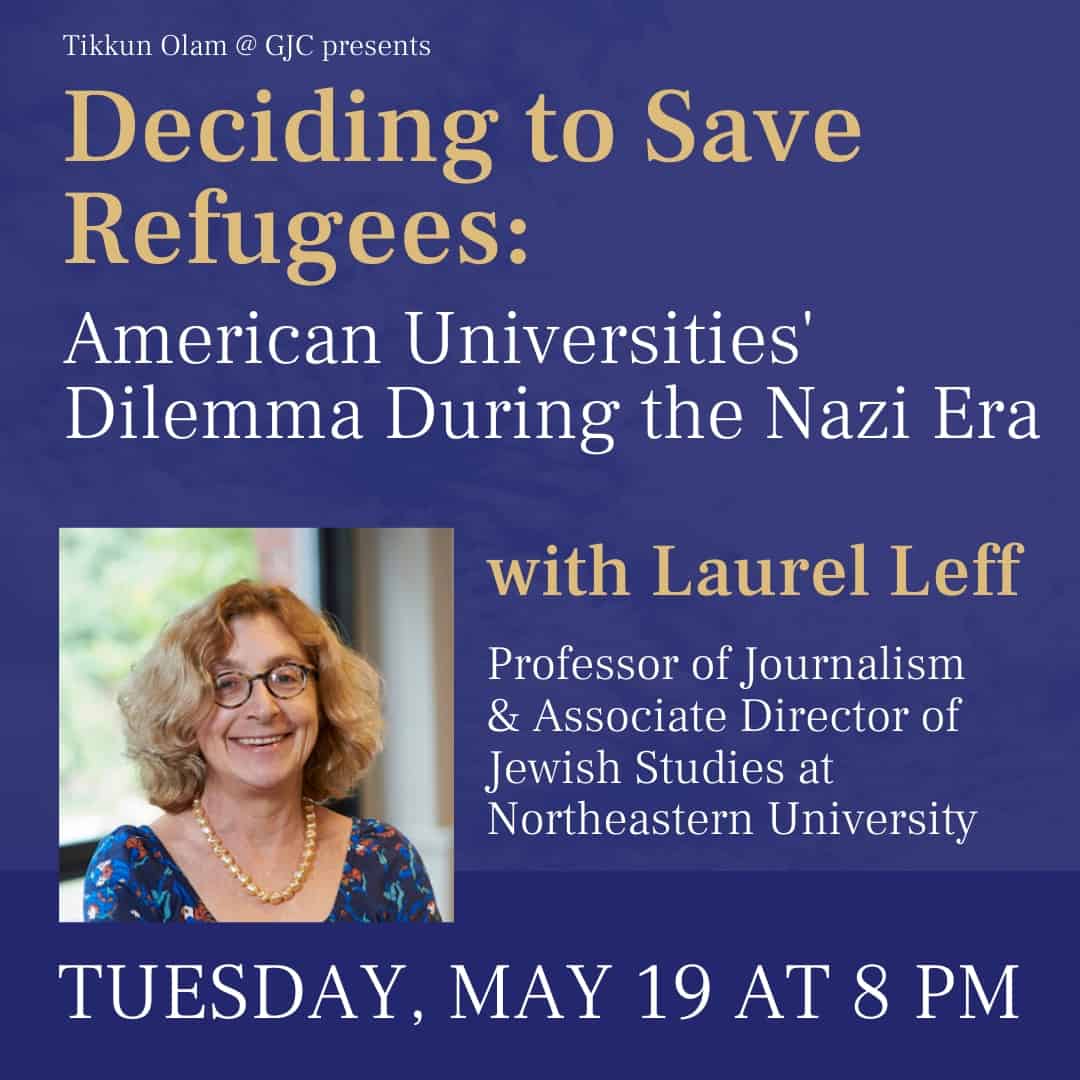 The United States’ role in saving Europe’s intellectual elite from the Nazis is often told as a tale of triumph, which in many ways it was. America welcomed Albert Einstein and Enrico Fermi, Hannah Arendt and Herbert Marcuse, Rudolf Carnap, and Richard Courant, among hundreds of other physicists, philosophers, mathematicians, historians, chemists, and linguists who transformed the American academy. Yet for every scholar who survived and thrived, many, many more did not. Tikkun Olam @ GJC is pleased to welcome Laurel Leff, who will speak on “Deciding to Save Refugees: American Universities’ Dilemma during the Nazi Era.” Laurel is Professor of Journalism and Associate Director of Jewish Studies at Northeastern University. Her latest book is Well Worth Saving: American Universities Life and Death Decisions on Refugees from Nazi Europe. We hope you can join us on Tuesday, May 19 at 8:00 PM.

About Well Worth Saving: American Universities’ Life and Death Decisions on Refugees from Nazi Europe
To be hired by an American university, a refugee scholar had to be world-class and well connected, not too old and not too young, not too right and not too left and, most important, not too Jewish. Those who were unable to flee were left to face the horrors of the Holocaust. In this rigorously researched book, Laurel Leff rescues from obscurity scholars who were deemed “not worth saving” and tells the riveting, full story of the hiring decisions universities made during the Nazi era.  Purchase the book here.

About Laurel Leff
Laurel Leff is an Associate Professor of Journalism and Associate Director of Jewish Studies at Northeastern University in Boston. Her latest book, Well Worth Saving: American Universities’ Life and Death Decisions on Refugees from Nazi Europe was published by Yale University Press in December. Her previous book, Buried by The Times: The Holocaust and America’s Most Important Newspaper was published by Cambridge University Press in 2005. Buried by The Times was chosen as the Best Media History Book of 2005 by The American Journalism Historians’ Association and Best History Book of 2005 by ForeWord Reviews. She has published several monographs on the response of American elites to pleas to rescue European Jews during the 1930s and 1940s. Leff is also project director of a digital humanities project, “Rediscovering Refugee Scholars,” that is collecting data and designing a website to chronicle the lives of about 5,000 European scholars who lost their jobs during the Nazi era and sought positions with American universities. Leff has a master’s in the study of law from Yale University and a master’s in communications from the University of Miami. She received an A.B. from Princeton University with a major in the Woodrow Wilson School of Public and International Affairs. She was formerly a reporter for The Wall Street Journal and The Miami Herald and an editor with American Lawyer Media Inc. and The Hartford Courant.