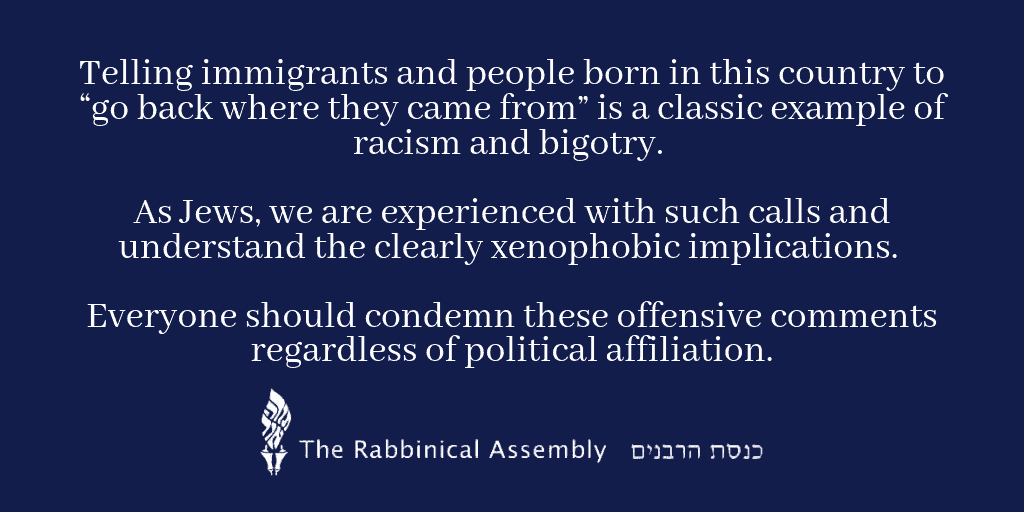 We are about to enter the Three Weeks, the period leading up to the commemoration of Tish’ah b’Av, the day of the destruction of the Temples in Jerusalem thousands of years ago.  The ancient rabbis ask, why were the Temples destroyed?  What could have caused the annihilation of such a holy place?  Among many answers the rabbis offer, one stands out:  sinat hinam – “causeless hatred.”  Unreasoning hatred of other people, the rabbis argue, is so destructive that it can undermine even a society structured on good principles and counteract the good actions of some of its members.  Today, in this country, in chat rooms and social media, and now even from the White House and the halls of Congress, we are seeing exactly this same, destructive force being deployed:  unreasoning hatred of others, expressed through racism and bigotry, vitriol and lies.  The Jewish people has seen this before, not only at the time of the destruction of the Temples but in every age and in every place where we have lived, including in the United States.  We know how dangerous it is, to others and to us, and we know how much it violates the principles of Torah that we hold dear.  We must condemn it and fight it with all of our power.  Our future, and the future of this country, depends on it.